Additionally, a power analysis calculator is provided for log-linear models.

The basic idea behind capture recapture modeling is to run two or more surveys (capture events) and record the individuals who participate. If many people participate in multiple events, it is likely that you have recruited a significant chunk of the population. On the other hand, if no one appears twice. then we would likely conclude that the population is much larger than the sample we collected.

There are two fundamental concerns that arise capture recapture:

The Log-linear and Bayesian latent class methods both provide mechanisms to deal with individual heterogeneity. These are covered in more detail below. However, including heterogeneity in your model (regardless of the method) will greatly increase the uncertainty of your estimates, and it is often difficult to determine which of the potential models to use.

This is a tutorial for the analysis capabilities of the shinyrecap package.

To install the latest development version from the github repo run the following in R:

The analysis application works with data in “Capture History” format. Each column should represent a capture event and each row should be a capture history. Optionally the last column may be the count of individuals with that particular capture history. “1” indicates capture, and “0” indicates not captured, so the history

represents an individual who was captured in the 2nd and 4th event, but not the 1st or 3rd. A properly structured 3 event CRC dataset would look something like:

In many studies, particularly those in the epidemiological domain, don’t collect data in this format. Rather, at each event, individual participation is recorded, along with information about whether they were captured in previous events. Thus, a 3 event CRC study would have three datasets.

At the first event we count the number of participants

At the second event we count the number of participants, broken down by whether they participated in the first event.

At the third event we count the number of participants, broken down by whether they participated in the first and/or second event.

Taken together, these three datasets are equivalent to the capture history dataset discussed above. shinyrecap provides a user interface to help perform the conversion in format. 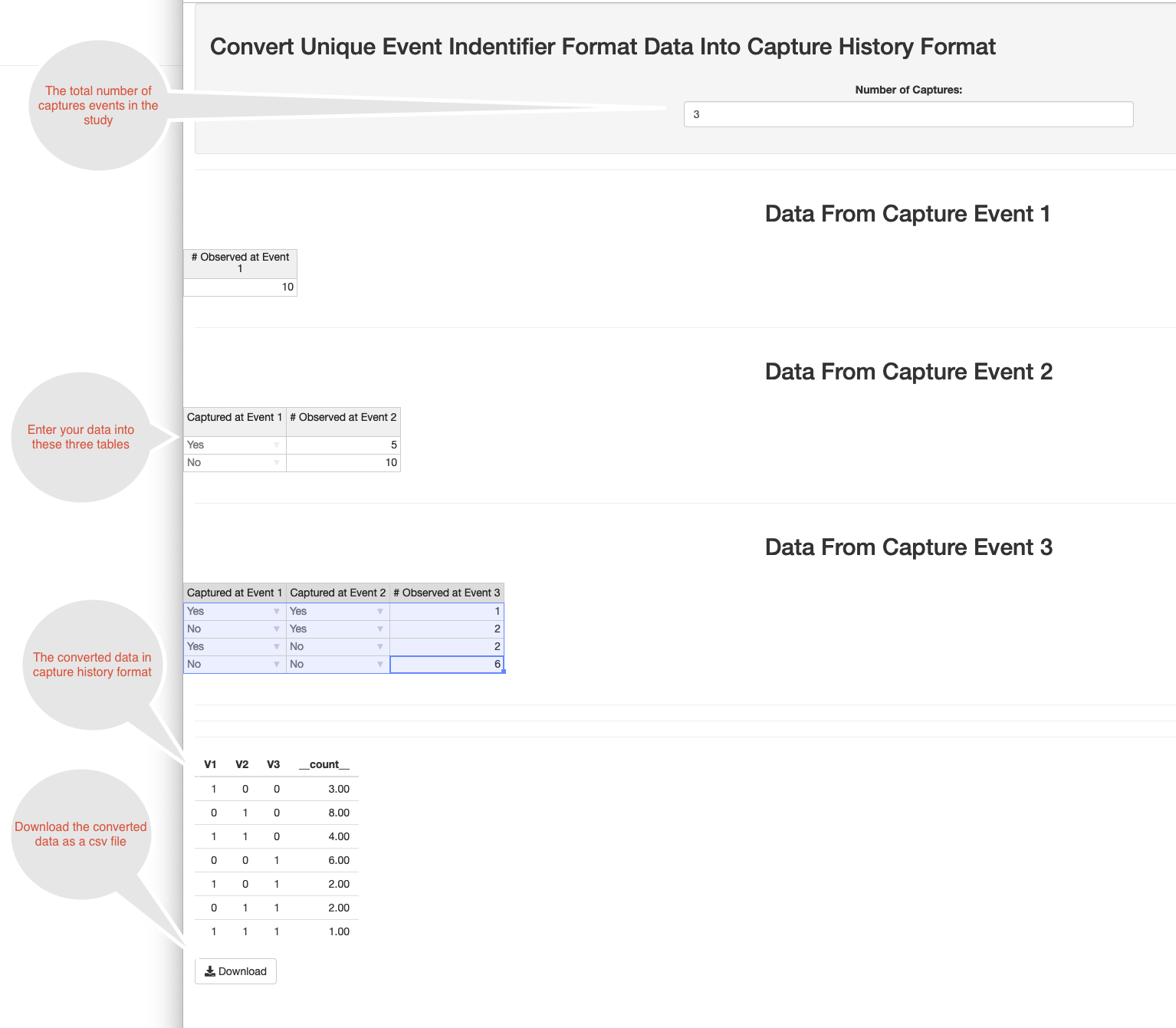 The first step toward performing an analysis is to load in the data. The application supports delimited text formats such as comma separated values (csv). Each column should represent a capture event and each row should be a capture history. Optionally the last column may be the count of individuals with that particular capture history. 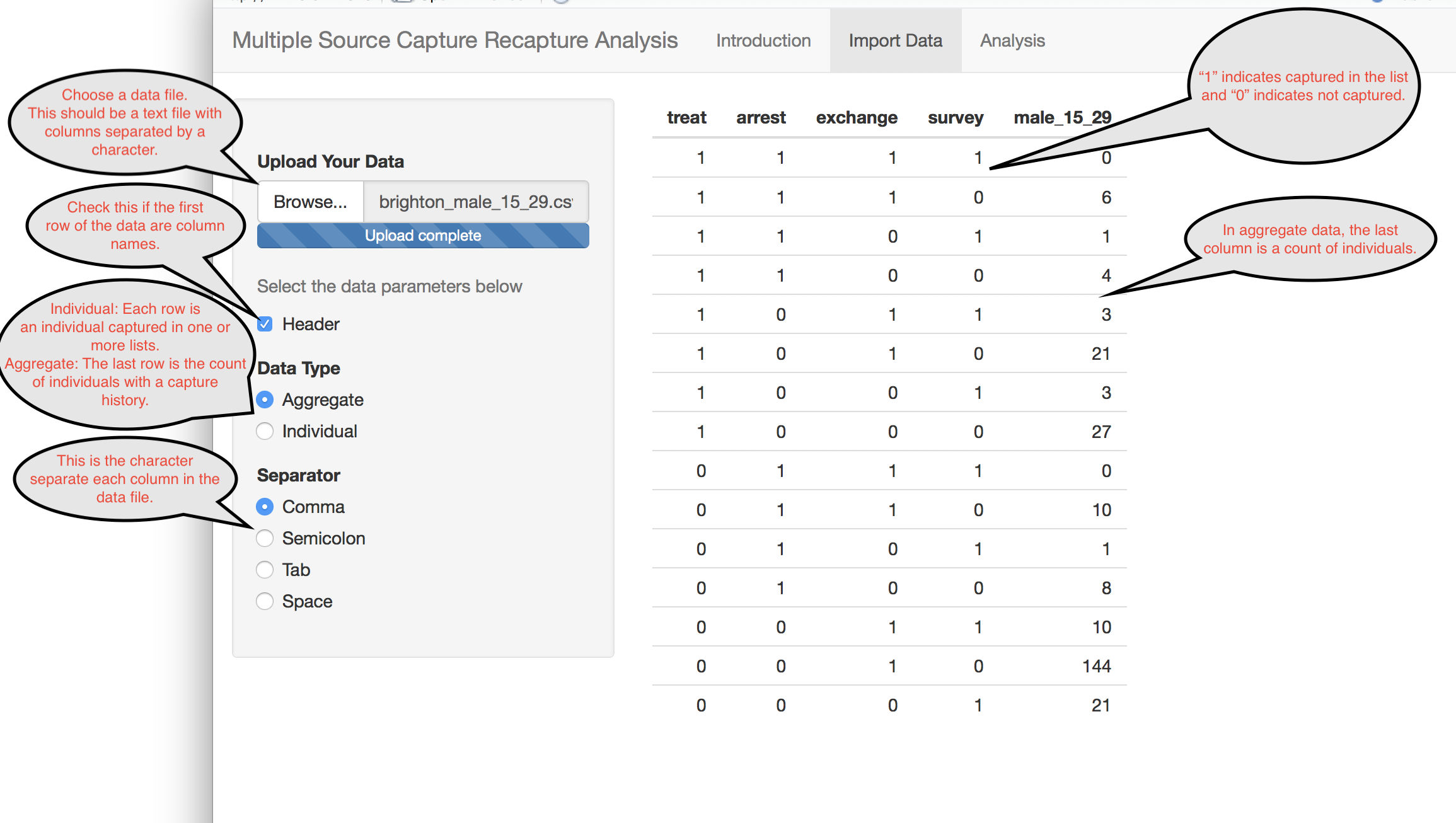 Selection between models is often done using either the AIC or BIC. For these, lower numbers indicate a “better” model fit. 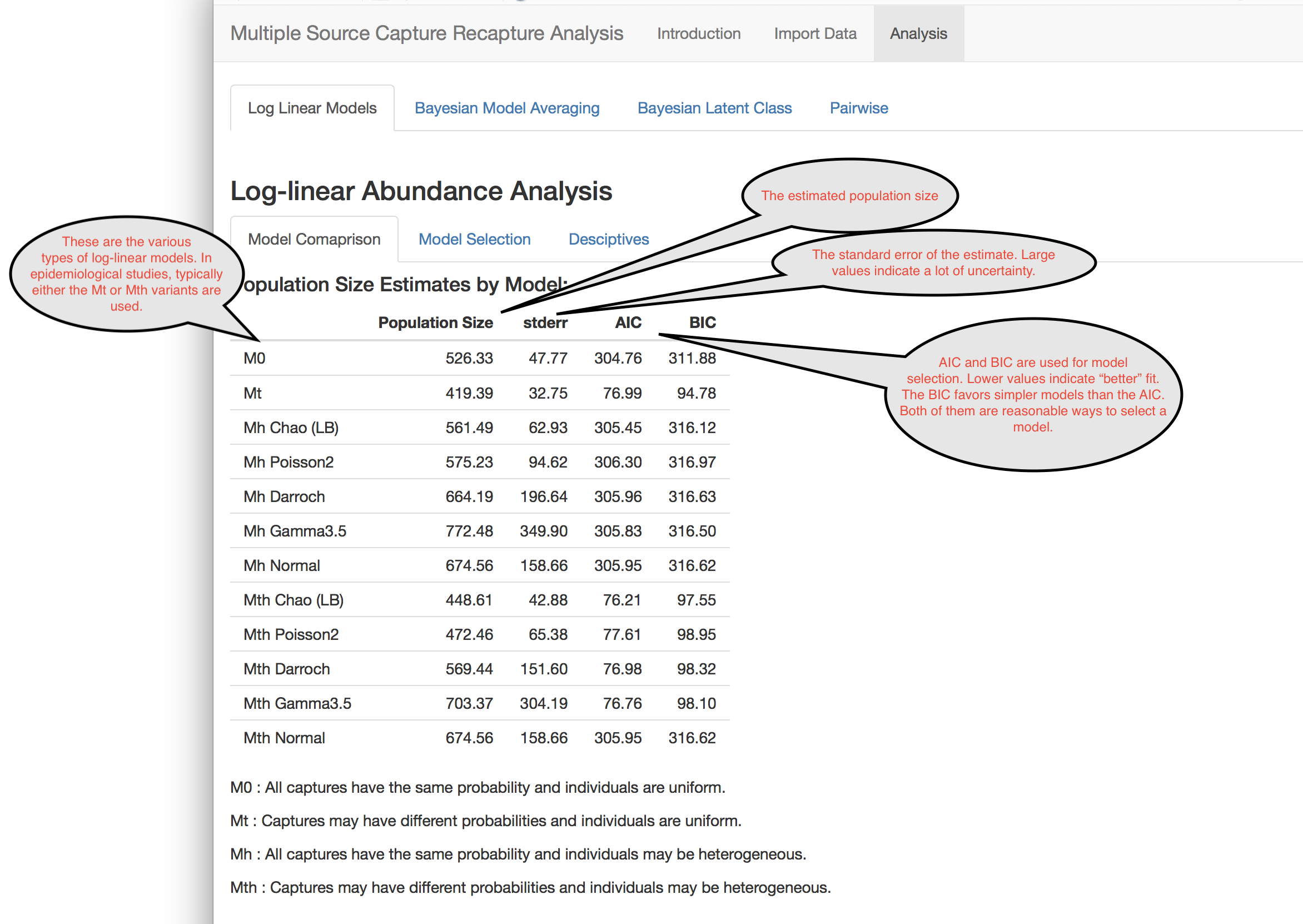 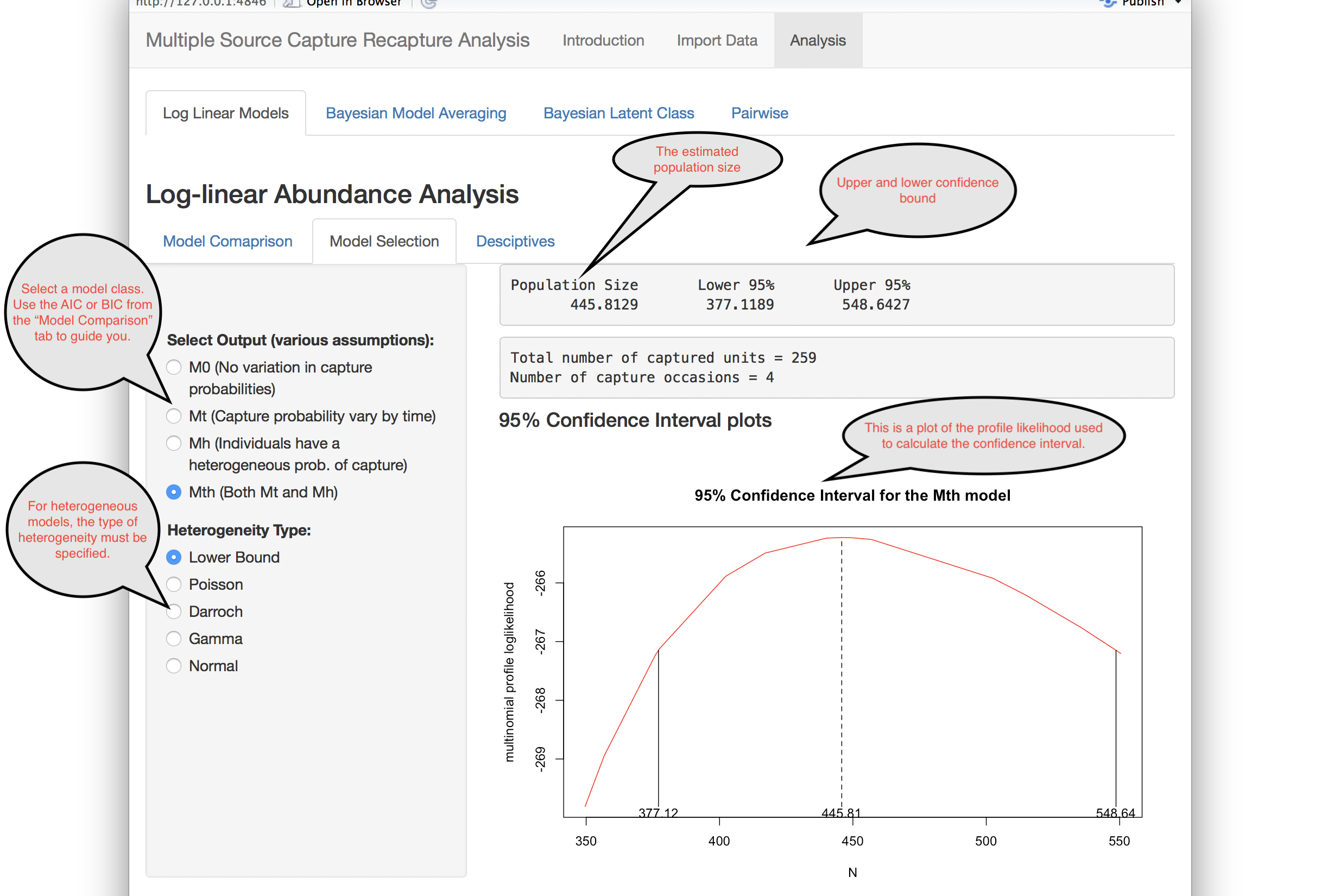 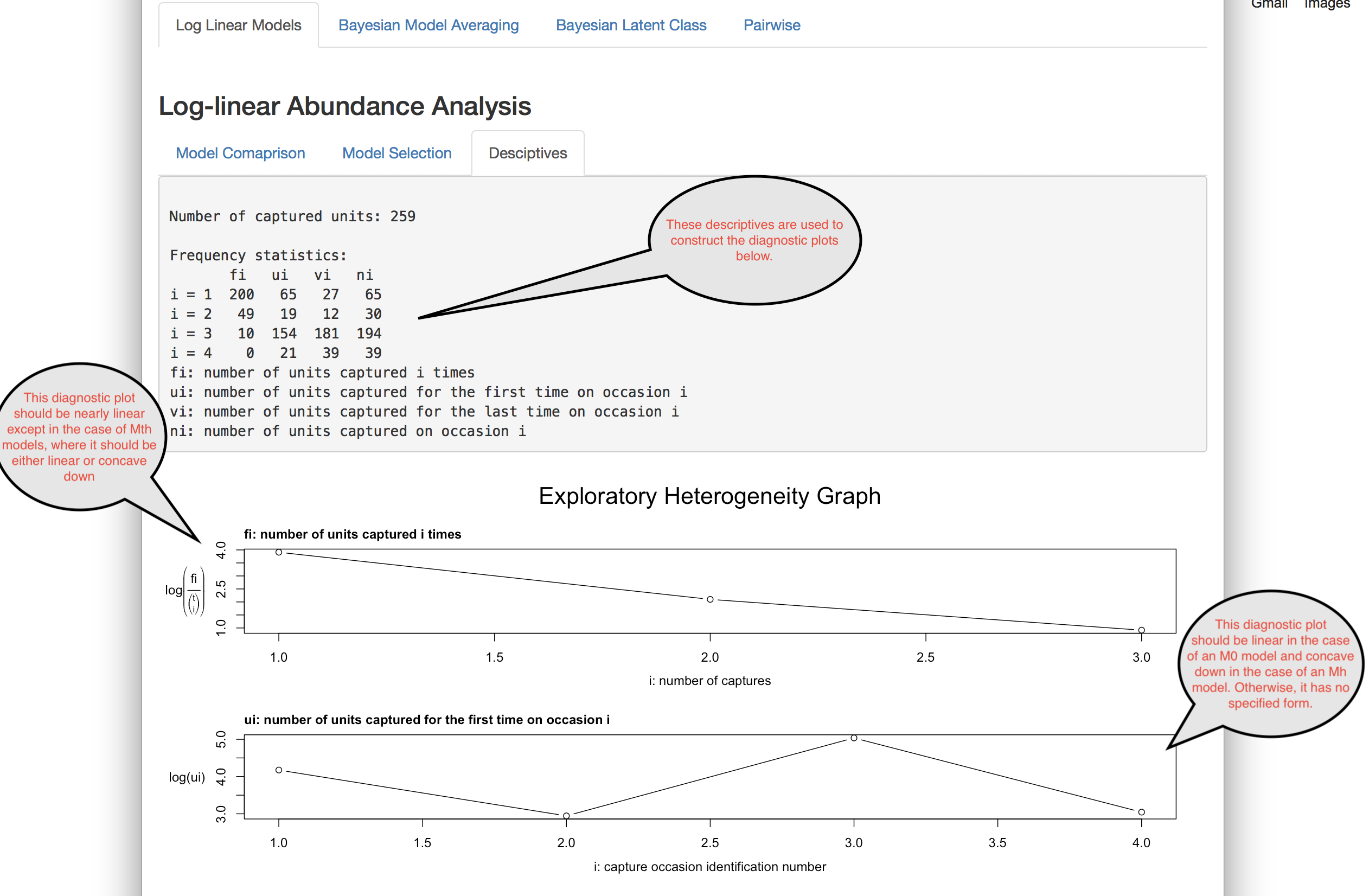 This method allows the analyst to flexibly account for list dependency by creating models for all possible dependencies, and averaging over them in a way that is proportional to the probability that the dependence is correct.

The first step in the analysis is to formulate a prior for population size. This is represents the analyst’s prior knowledge about population size along with uncertainty. By default, a “non-informative” prior is used. 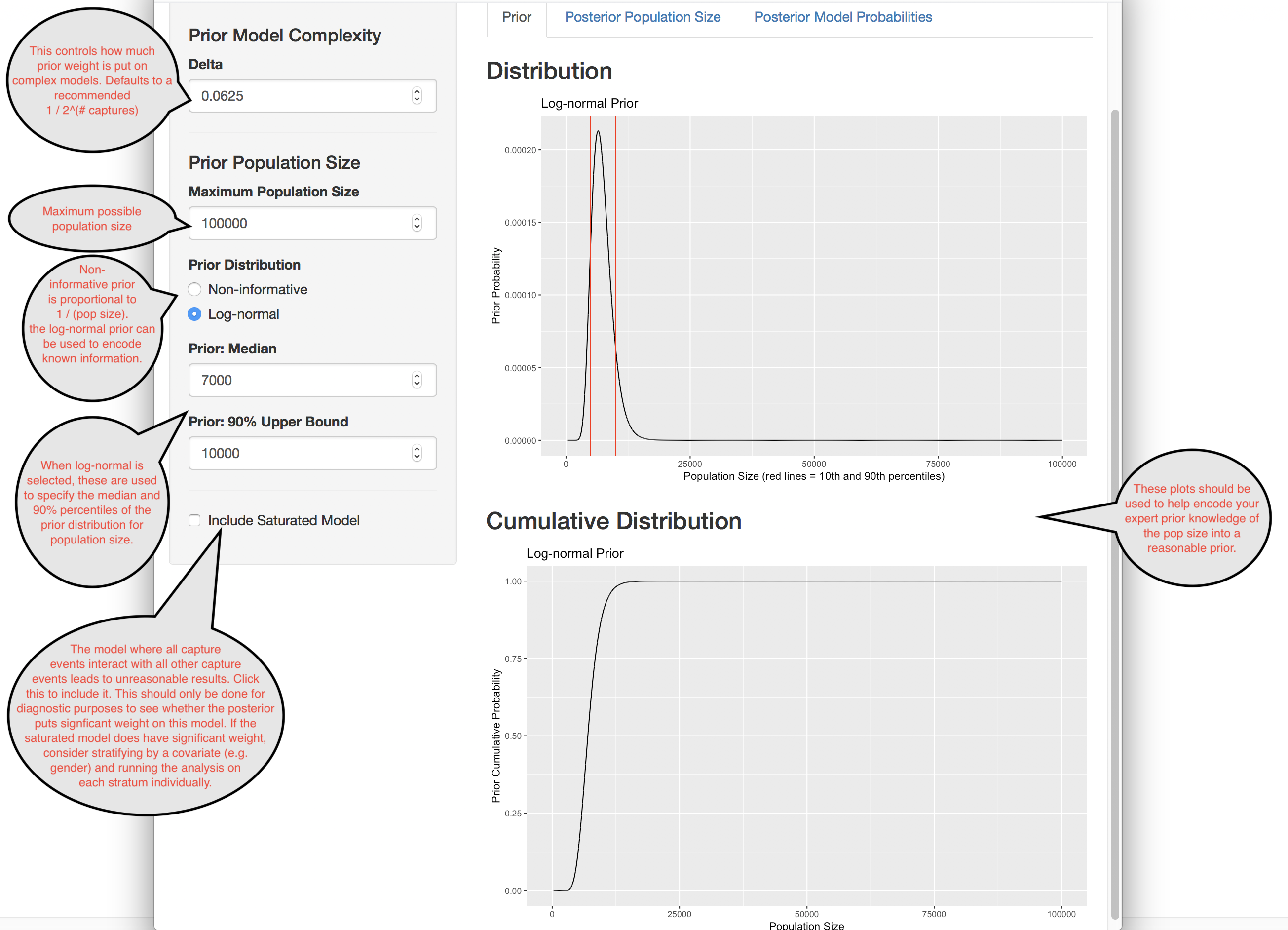 Once the prior is specified, the probability distribution of the population size can be calculated. 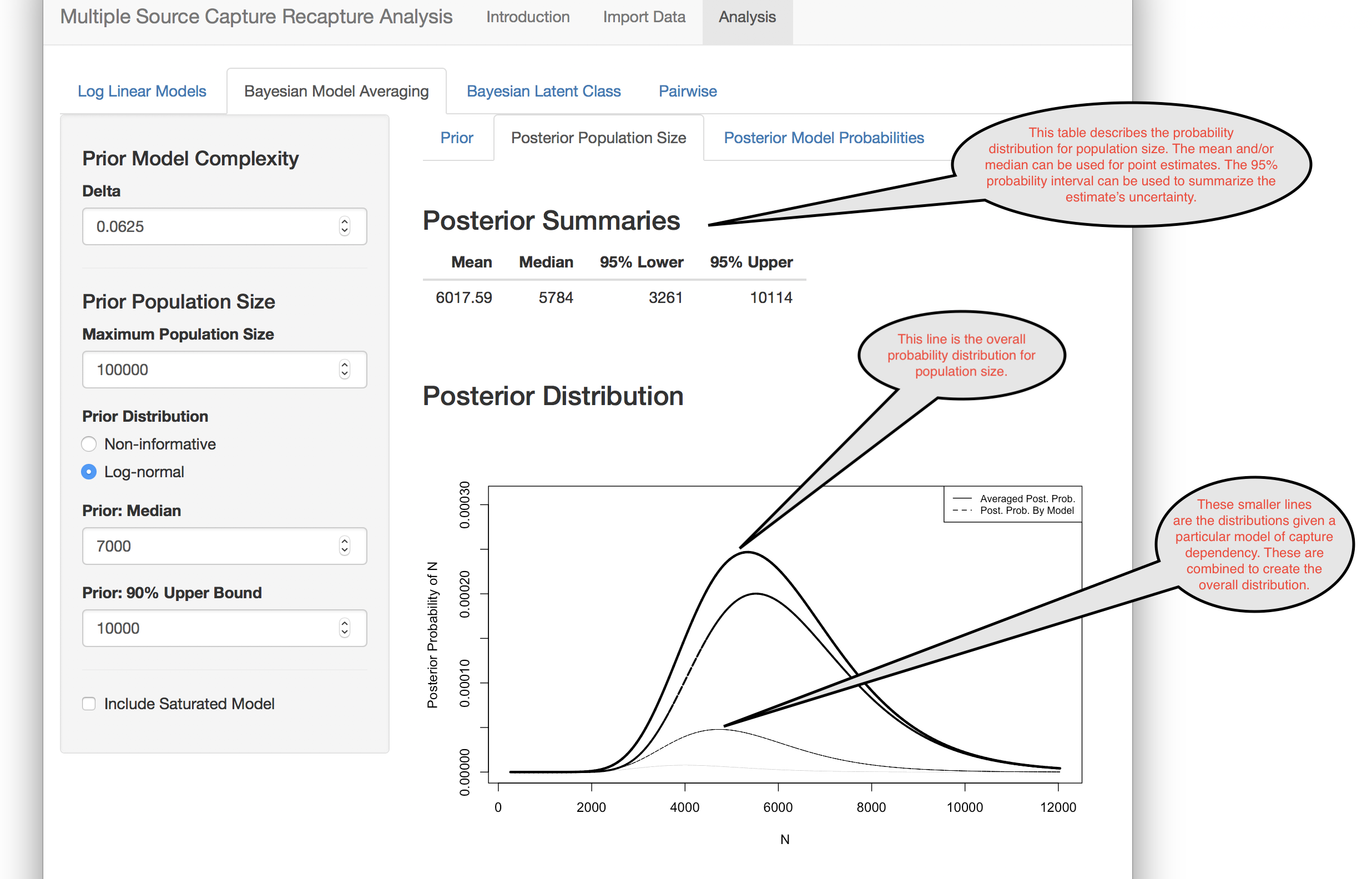 Finally, it is useful to examine what dependencies exist in your data. 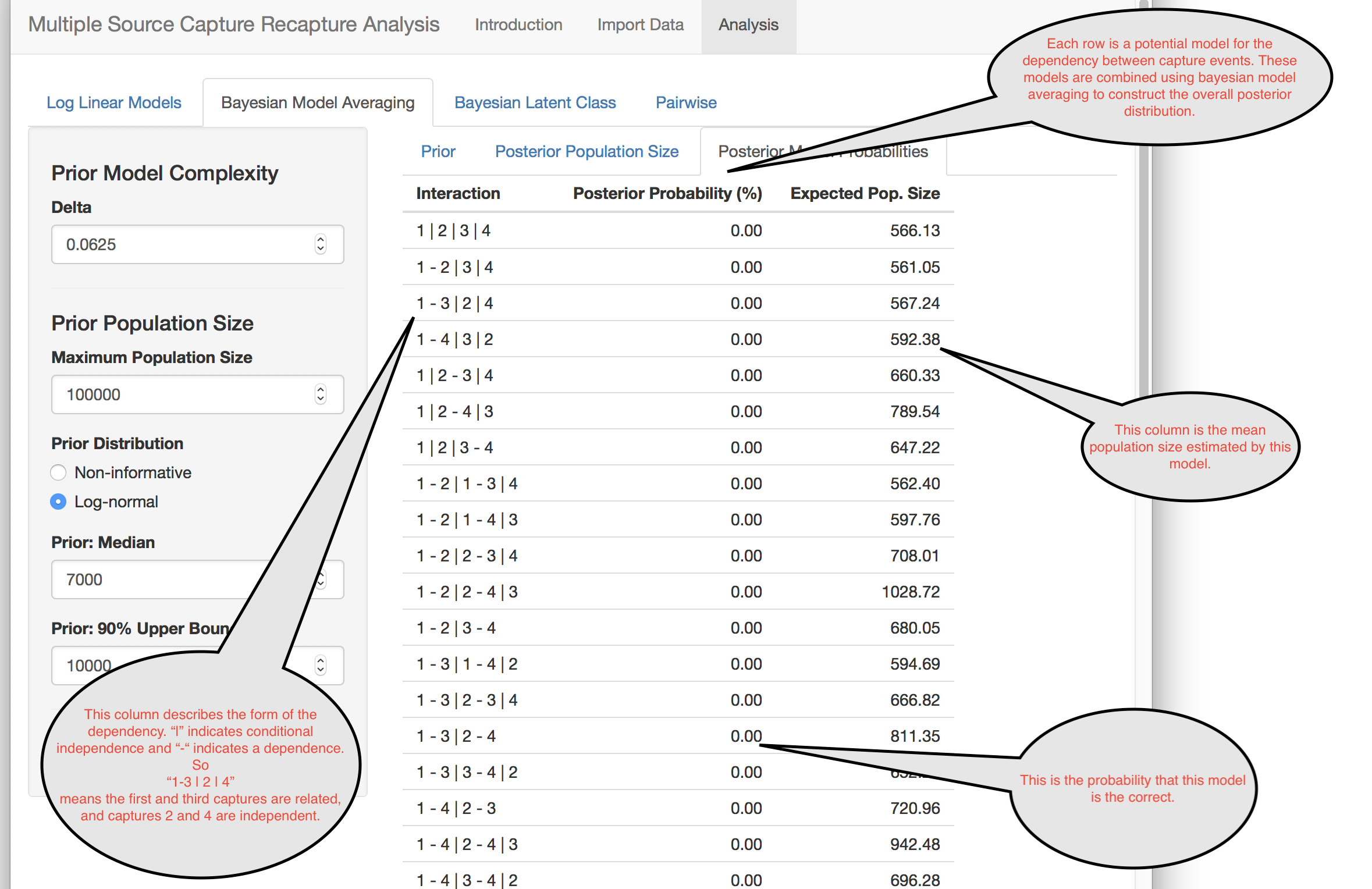 The Bayesian latent class model deals with heterogeneity in a novel way. It posits that there are unobserved subgroups in the data with different capture probabilities for each capture event. The number of these groups and their probabilities are unknown. The algorithm uses a Bayesian framework to estimates these, along with the population size.

The underlying algorithm is computationally quite complex and uses something called Markov Chain Monte Carlo (MCMC) to sample from the distribution of population size. 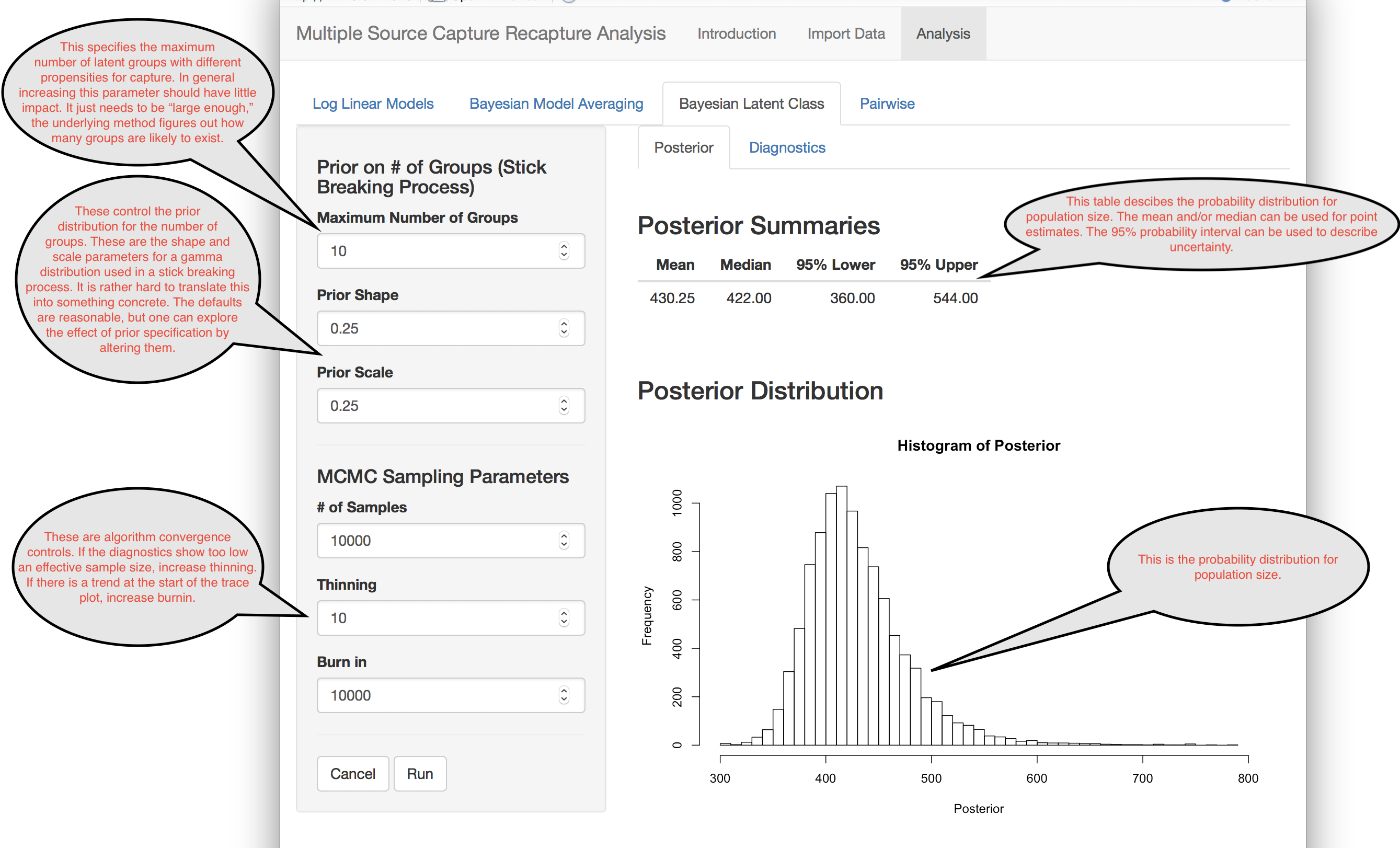 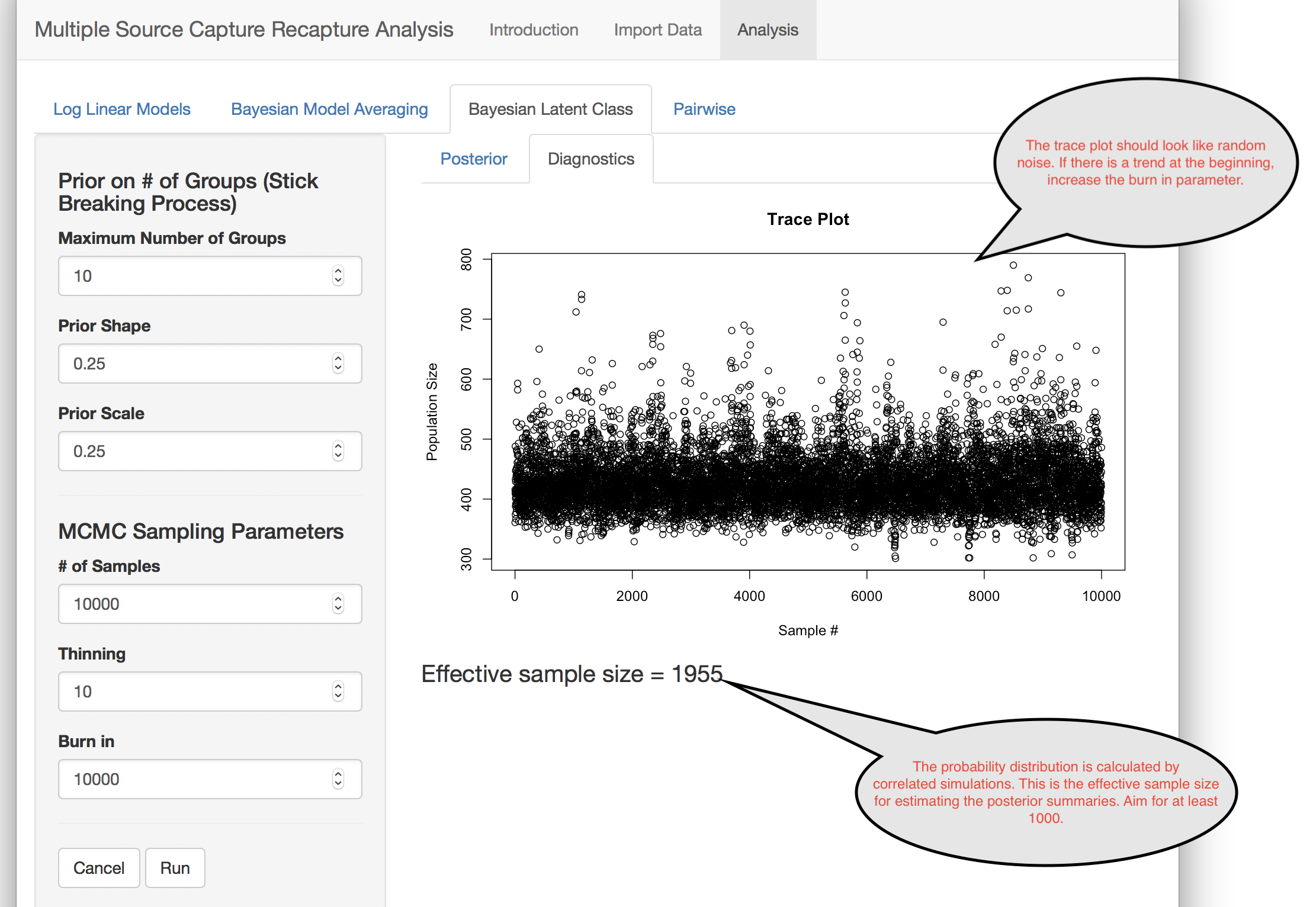 This tab shows population estimates using each pair of capture events. It can be useful to look at this as a diagnostic step. Ideally each pair should have similar estimates of population size. 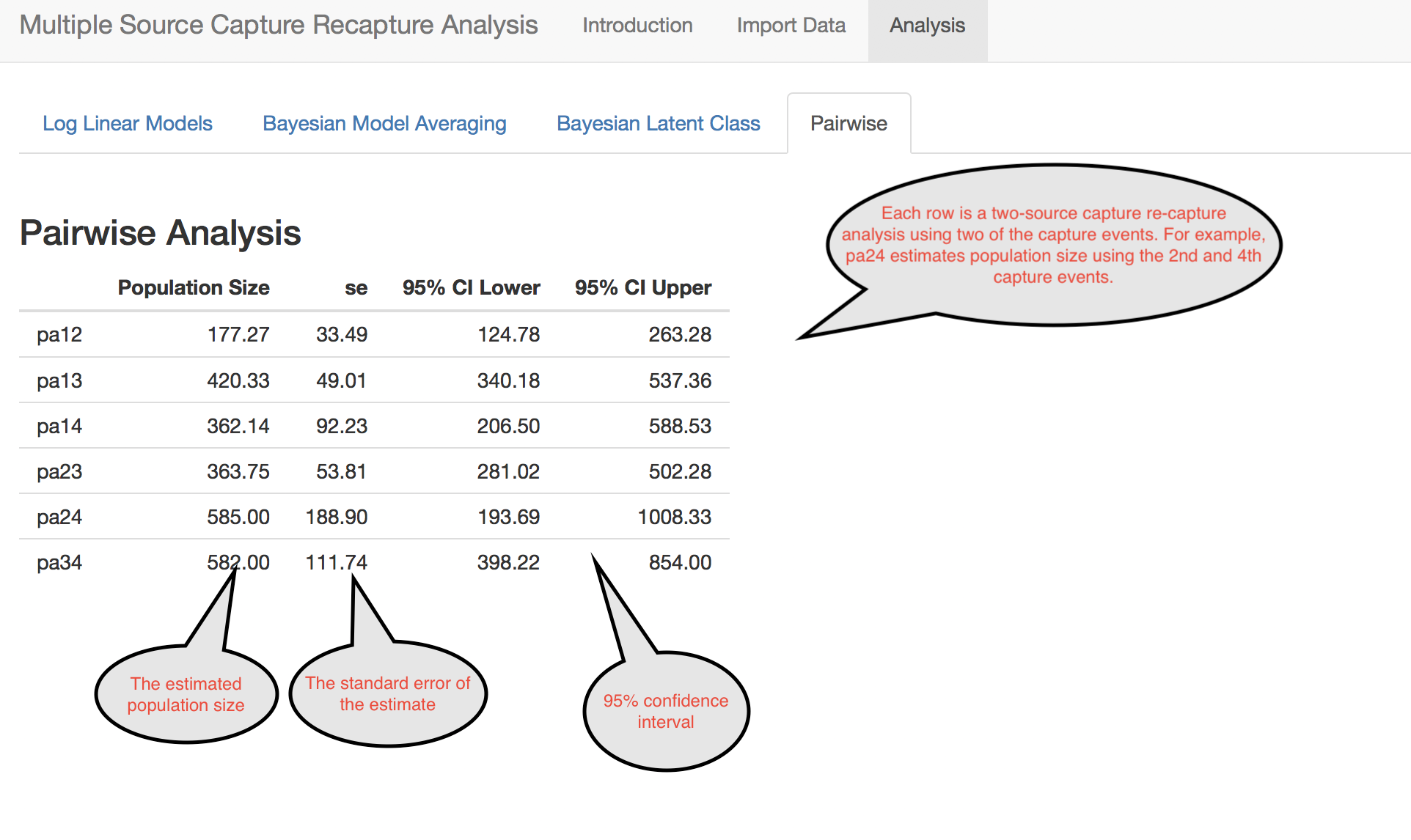 When planning a multiple source capture recapture study, it is useful to get an idea of how close your estimates of population size will be to their true value for given sample sizes. The power analysis lets you do this for log-linear modeling. 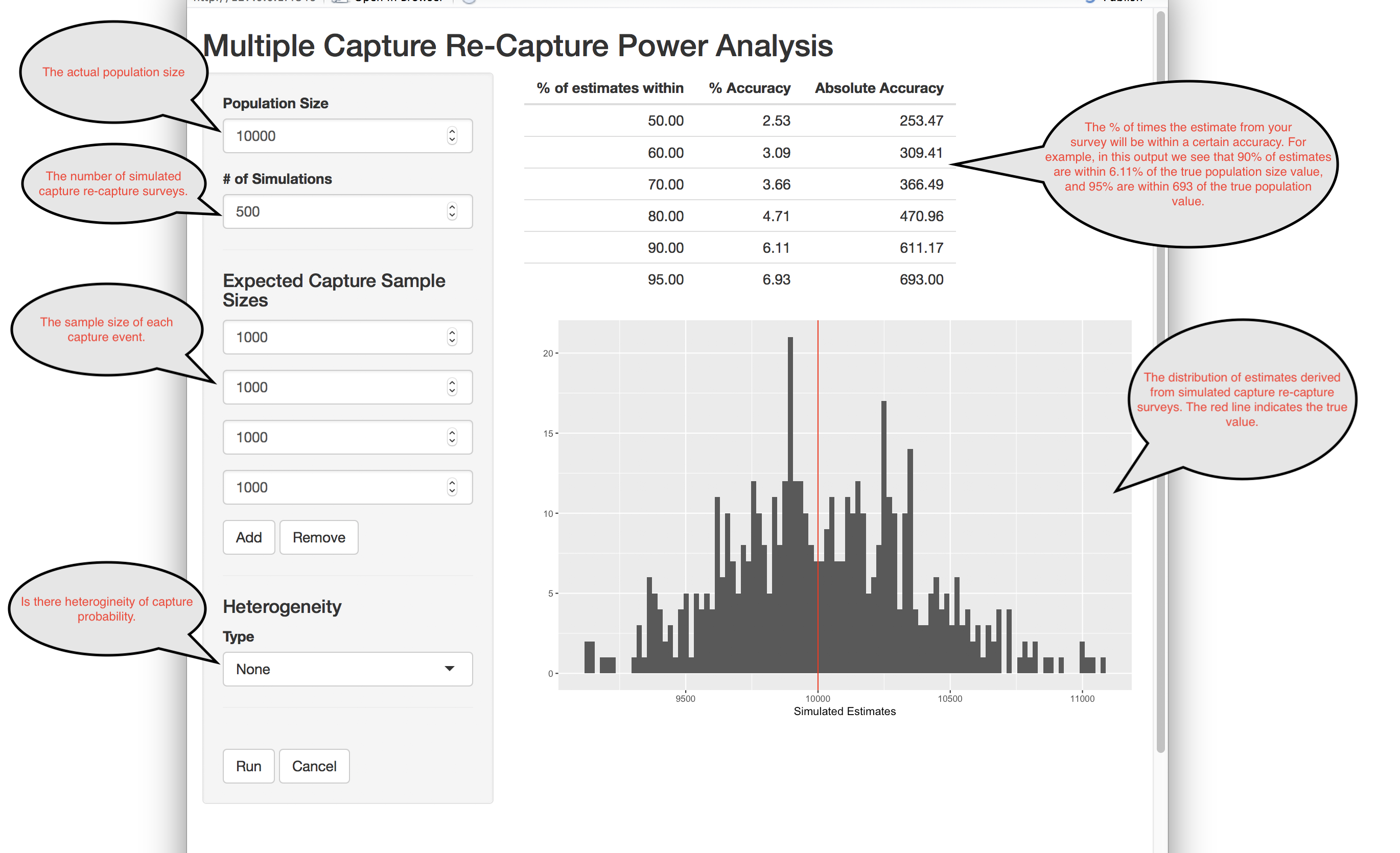