The Triangulator is a Shiny user interface designed to help derive consensus estimates of a population quantity (e.g. a population size, a proportion, a mean, etc.) from multiple empirical estimates. Underlying the application is a Bayesian multi-level model, and the steps of the consensus process proceed as follows:

This document will guide you through the above steps. The mathematical details can be found here

The Triangulator is hosted on the EpiApps.com website and may be run there. Alternatively, it may be run locally using R.

The Triangulator may be installed from GitHub with:

Launch the Shiny application with:

Experts and stakeholders understand the population of interest and the studies that have been performed in it. Their guidance will be used to define prior beliefs about the distribution of the population quantity and the quality of the studies. These individuals should also be in a position to sign off on the consensus estimate for public release.

An empirical estimate is one that has been generated through a defined data collection process with at least some level of statistical validity. Examples used in HIV key populations include:

Examples of estimates that are NOT empirical are:

For each estimate, the following information should be obtained:

Intervals are required for the triangulation process. Without a measure of the uncertainty of an estimate, it is impossible to determine how much it should be trusted relative to other estimates. In some cases however, a study or report may only provide a point estimate and not an interval. There are a few strategies that may be used to generate an interval from available information.

For two source capture recapture type estimates, which include service and event multipliers, the study will typically report the number of individuals in the first and second samples ($n_1$ and $n_2$). For service and event multipliers the first sample count is the service or event count. To construct an interval the number of people present in both the first and second samples is required. This may be reported, but if it is not the population size estimate ($\hat{N}$) can be used to recover it using the formula

A CRC confidence interval calculator may then be used to construct the interval.

For a proportion with the point estimate ($\hat{p}$) reported and the sample size reported ($n$), the Wald 95% confidence interval is

Wald intervals are not always ideal as they require larger sample sizes to meet their assumptions and can have intervals that are less than 0 or greater than 1. Wilson, or exact Clopper-Pearson intervals are preferred. To calculate these, first calculate as psuedo-count for the number of positive cases given $n$

Then use a calculator to construct the intervals, rounding $n_+$ to the nearest integer.

If the standard error ($\hat{\sigma}_{se}$) of the mean estimate ($\hat{m}$) is reported, then the interval may be constructed as

where $n$ should be calculated similarly to the proportion example.

Begin with the elicitation of the median. Pose the question

**What is your best guess for what the quantity is?**

to each expert. Remind them to ignore the estimates that are going to be used. Record each value and then open a discussion two synthesize these into a single value for the whole group.

Next elicit the 75% percentile. Pose the question

**We are uncertain about what the quantity is. Maybe it is higher than our best guess and maybe lower. For some value larger than your best guess, you think that there is a 25% chance it is higher and a 75% chance it is lower. For what number do you think that the probability the quantity of interest exceeds this number is 25%?**

Select the appropriate estimate type in the “Enter Estimates” tab of The Triangulator. Then enter the median and 75% percentiles into the “Define Prior Beliefs” tab. The define prior beliefs tab can be used to refine the prior distribution and obtain a group consensus on it. 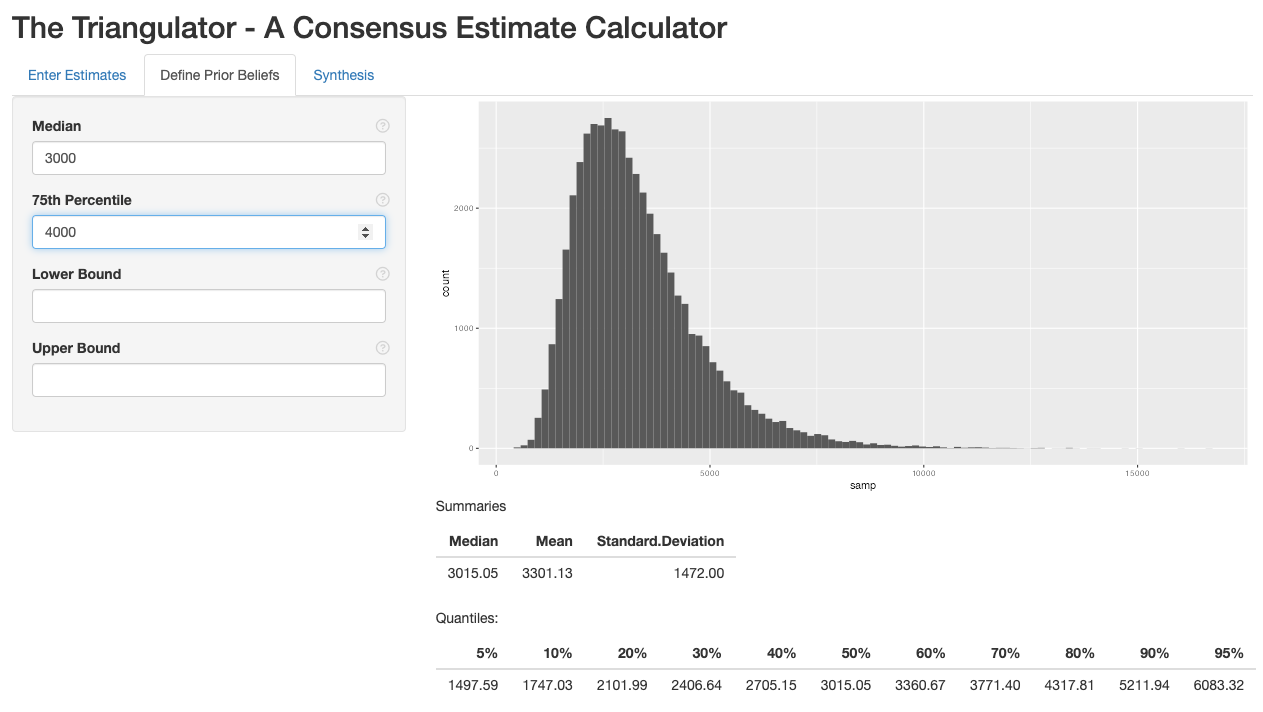 There are two sources of error that can be present in an estimate of a population quantity. The first is sampling error, which is the uncertainty arising from the fact that we only collect a sample from the population and not everyone in the population. Sampling error is what is accounted for by confidence intervals.

With the values specified in the previous steps we are now in a position to perform the analysis. First, the estimates and design confidences are entered in the “Enter Estimates” tab. The estimate type (population size, proportion, mean and other) is also specified in this tab 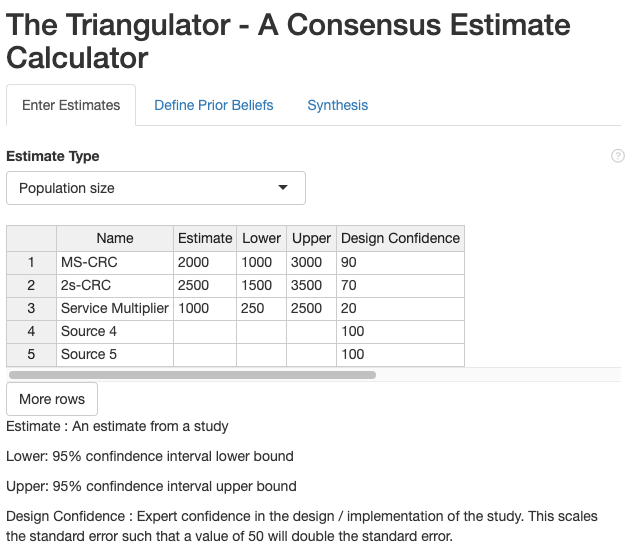 The service multiplier is given a low confidence (20%) as the service list captures a very visible subset of the population and we are not confident that the list is independent of our second sample. The 2S-CRC is given a decently high confidence at 70%. The 3S-CRC is the most rigourous study and is given a confidence of 90%.

The “Define Prior Beliefs” tab is used to specify the prior. In our example, we will use the 3000 median and 4000 75th percentile discussed in step 3.

The value of tau is the scale of how much bias exists across studies after accounting for the “Confidence” values. We set the prior scale for tau to be equal to a “multiplier” that is multiplied against the standard deviation of the estimates.

We typically want tau to be very small, indicating a belief that between study biases have been accounted for by specification of the “Confidence” values. However, if the data is inconsistent with that belief this should be picked up. A tau multiplier of 0.01 serves well in most cases. 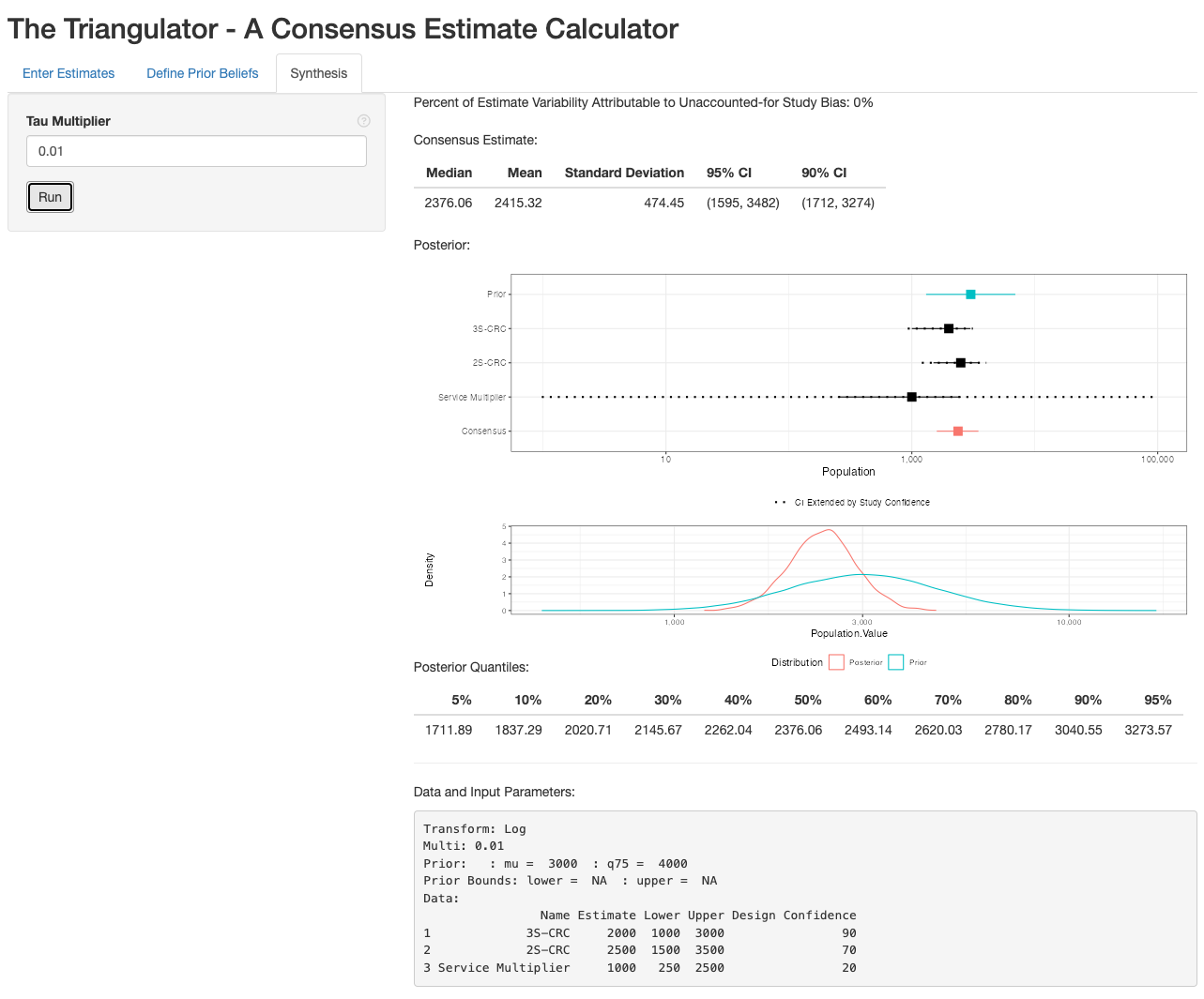 The first value in the results is the “Percent of Estimate Variability Attributable to Unaccounted-for Study Bias,” which is the estimate of the amount of non-sampling bias that was not accounted for by the design confidences specified by the user. If can range from 0 to 100%. If it is high, this indicates that the estimates are inconsistent with one another even after scaling up the standard errors using design confidence. If this is over 30%, consider reviewing the design confidences.

The top table displays the point estimate (Mean) as well as 90% and 95% credible intervals. The forest plot shows the prior, each individual estimate and the posterior. This is followed by a density plot comparing the prior to the posterior. If the prior looks very similar to the posterior, this indicates that the estimates are not adding any information, which can either indicate that the sample sizes for the estimates is too small to be informative, or our confidence in the studies is too low to get any inference out of them. The posterior is also summarized in the quantile table.

Finally, the Data and Input parameters are displayed. These values provide all of the information necessary to recreate the analysis. This information should be included in the report as it allows the analysis to be reproduced by a third party. It also shows the decisions that the experts made (i.e. the prior and study confidences), allowing the consensus process to be fully transparent.